History Of The Pro Quip Jerry Can

Martin Haines as young and enthusiastic lad, began working at Prestronics (Aust) Pty Ltd. It was through Prestronics that Martin won the contract to supply Shell Shops across Australia with a range of products, not least of which were 20L Metal Jerry Cans. Not even Martin could have known what this product would mean to him and the wider industry in the years to come.

Shell’s largest selling item was the 20L Metal Jerry Can and Martin knew that if he could secure distribution rights for all of Australia, the business potential was immense. Whilst manufactured in Latvia, all sales were managed out of Moscow. Martin visited USSR in late 1989 (very rare for Western Businessman to travel to this region).

A few meetings in Latvia followed, but by this time the Russians in charge were already planning their exit, and the Latvian Government took over control of the large facility. The relationship between Martin and the new Latvian management team was an instantly strong, and as a result he formed a financial joint venture to develop their metal Jerry Can business further. The impact of this joint venture is still seen today on millions of Jerry Cans around the world. The factory was renamed ValPro (as it is still today), ‘Val’ for the town Valmiera, and ‘Pro’ for Pro Quip. As the business grew, the joint venture was sold back to the Latvian owners, however Pro Quip’s legacy lives strong.

Safety of manufactured products was always a huge focus for Martin and the known issue with metal Jerry Cans accidentally opening led to the worldwide patent of the ‘secondary locking pin closure’, now virtually standard internationally! The metal Jerry Can with this new innovative closure became the first product of its type to gain Australian Standard compliance, and orders instantly followed.

Martin was instrumental in the development and continued improvement in Australian Standard AS2906 (1999) & (2001). These standards are now world renowned as consistently the strongest in any market.

Pro Quip Plastic Fuel Cans were launched, manufactured in Melbourne, are carried by virtually all the major retail outlets in Aftermarket, Camping and Hardware locally, and export has been a huge growth channel.

Our Australian Made, plastic fuel and water cans are shipped across Asia, Middle East, Europe and North America.

Martin co-development with AFAC (Australasian Fire and Emergency Service Authorities Council) to standardise Jerry Can colours following a number of tragedies. There were stories around the fire and emergency communities of wrong fuels going into vehicles and causing engine damage, but it wasn’t until this occurred during a fire and lives were lost that a solution had to be found. Working with Martin, and others, AFAC sought advice, and the concept of consistent distinct Jerry Can colours was developed. To this day, any can used in any AFAC approved vehicle must have these safer designed cans.

The Pro Quip Super Can was born!

For many years Jerry Can designers had struggled with the concept of making a can easier to open, even under higher pressure. Often a can is opening under pressure and the sudden release of vapour and fuel is an unpleasant experience for consumers. Some companies tried an externally threaded screw cap, but these would commonly leak. Through a relationship with Australian fuel cap manufacturer, CPC, Pro Quip developed the worldwide patented Super Can. The Super Can was the first product of its type to not only have a locking interior threaded cap (same as most cars on the road), but FULLY Australian Standard compliant.

Operating for over 30 years and known as Australia’s No.1 Fuel Can. Our plastic & metal cans are well known throughout Australia and Internationally. Pro Quip fuel & water cans are very popular within the 4×4 community we take great pride in supplying Australia’s emergency and Military services. Our cans are available in most major Australian Retailers who trust and proudly sell our quality products to the end user. 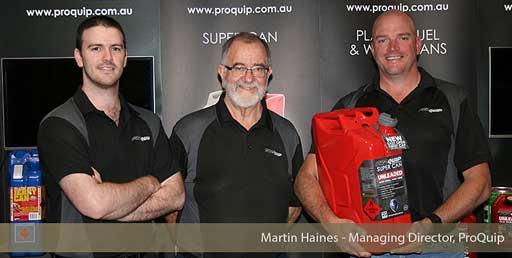